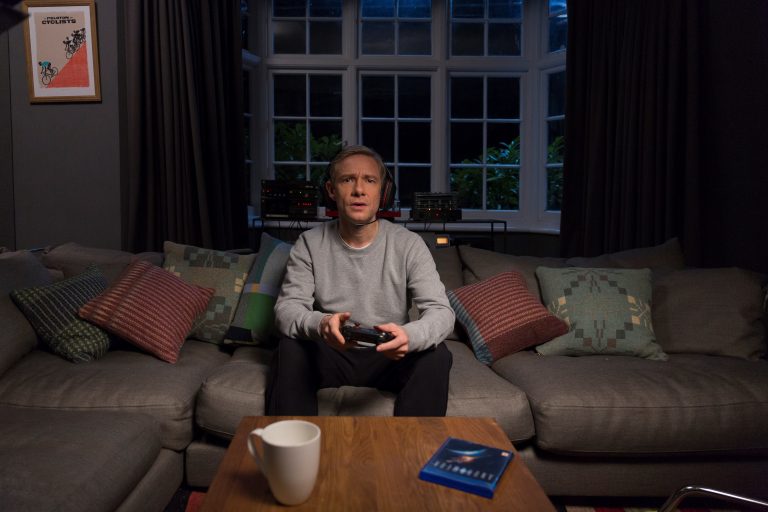 The TV advertisement begins with a spaceman floating through space, trying to make his way back to a space station before his oxygen depletes. The camera angle then switches to reveal Freeman is playing an online spaced-themed game. Unfortunately, Martin loses connection at the most crucial part of the game, much to the disappointment of his friend who is left abandoned in outer space.

Working with Framestore, the BAFTA and Oscar-winning studio famous for its visual effects work in films such as Gravity, Guardians of the Galaxy and Blade Runner 2049, the advert incorporates computer-generated graphics of the space station and a fully CG astronaut, Martin’s friend in space. British composer, music producer and songwriter Peter Raeburn composed the music and featured 54 musicians as part of the final recording.

Attentive viewers of the TV advert can try to spot a hidden six digit code which will give them  a 20% discount off Google Home products, including Google Home, Google Home Mini and Google Chromecast Ultra, when they visit www.vodafone.co.uk. All customers have to do is complete the purchasing journey and enter the hidden code at the checkout. This offer is valid for a limited time only, from 2 March until 10 June 2018, and can only be used in conjunction with Google Home products purchased online from Vodafone UK.

Glafkos Persianis, Commercial Director at Vodafone UK says: “It’s great to have Martin back on our screens, this time demonstrating how unreliable broadband can really ruin those most important moments, whether it’s a plot-twist reveal at the end of a film or the winning moment of an online game.  That’s why we have launched our Ultimate Speed Guarantee.”

The TVC launches on Friday 2nd March and will feature in primetime shows such as Ant and Dec’s Saturday Night Takeaway, The Voice and Celebrity Bake Off. The rest of the integrated campaign will feature across above the line, out of home, social, radio, press and digital executions.