Oliver Ruddick, 14, from Malvern and Oliwia Sztorc, 14, from Bromsgrove won the boys’ and girls’ tournaments respectively, booking their place at the National Finals at Wimbledon.

Over the 10-11 July weekend, junior tennis players from across Herefordshire and Worcestershire took part in the regional finals of the LTA and AELTC’s grassroots tournament Play Your Way to Wimbledon, Powered by Vodafone, competing for the chance to play on Wimbledon’s iconic grass courts this summer.

Talented players aged 14 and under battled it out at Manor Park Tennis Club for a chance to compete at the National Finals taking place on Wimbledon’s Aorangi Courts in August. Oliver Ruddick, 14, from Malvern, won a closely contested final via tie-break against Jack Bulbulia. Oliwa Sztorc, 14, from Bromsgrove, prevailed two sets to love dropping only three games against Madeline Walsh.

Following his win, Oliver said: “I’ve really enjoyed the day – it’s been great, although I’m quite tired now! I feel like just watching Wimbledon over the last two weeks has improved my tennis, so I’m looking forward to being able to play there myself”. 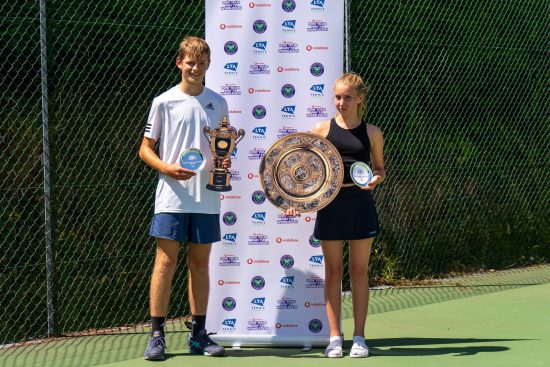 The winners will be invited to immerse themselves in the true Wimbledon experience, competing in whites and touring the historic Grounds and Museum.

The event at Manor Park Tennis Club was one of over 2,000 across 716 venues nationwide, planned this summer as part of Play Your Way to Wimbledon, Powered by Vodafone, delivering approximately 15,000 opportunities for amateur players to compete. From 2023, the LTA and the All England Lawn Tennis & Croquet Club are looking to expand the competition further, including through the introduction of additional age groups and disability categories, which Vodafone is proud to support.

Vodafone Ambassador Laura Robson said: “Playing at Wimbledon was a highlight of my career, so working alongside Vodafone to bring this competition to Herefordshire and Worcestershire and give winners the chance to compete at SW19 is amazing to see.”

Smart strawberries: How Vodafone IoT technology is serving up the perfect strawberry this Wimbledon

Vodafone’s UK Consumer Director, Max Taylor said: “We’re delighted to bring Vodafone Play Your Way to Wimbledon, to Herefordshire and Worcestershire. We are committed to providing more opportunities for young people to get involved in the sport and look forward to seeing the winners play at Wimbledon in August.”

Oliver Scadgell, Participation Director at the LTA said: “Play Your Way to Wimbledon, Powered by Vodafone is a wonderful initiative to encourage participation in tennis, and it was fantastic seeing so many young players taking part from Herefordshire and Worcestershire again this weekend. With the ongoing support of Vodafone and the All England Club, we’re thrilled to continue our goal of growing tennis at the grassroots level and get more people involved than ever before.”

Gus Henderson, Commercial Director at the All England Club, said: “It was fantastic to see Play Your Way to Wimbledon, Powered by Vodafone, visit Malvern this weekend, and offer young players from across Herefordshire and Worcestershire the chance to play on the grass courts at Wimbledon this summer. We’re excited to continue building on the heritage of the competition, and provide even more opportunities to access the sport in the future. ”

Launched in March, the latest iteration of Play Your Way to Wimbledon, Powered by Vodafone (previously known as the Road to Wimbledon) is delivered by Vodafone in partnership with the LTA, the All England Lawn Tennis & Croquet Club, forming part of the brand’s ongoing commitment to support grassroots tennis in the UK, whilst encouraging more people to pick up a racket.

About Play Your Way to Wimbledon, Powered by Vodafone

Formerly known as the Road to Wimbledon, the event was championed by the late Paul Hutchins MBE, former British Davis Cup Captain. It was first held in the UK in 2002, with the addition of qualifying tournaments in several Asian nations introduced between 2014 and 2019. Having paused the event due to the pandemic and given the introduction of a 14&U event to the Junior Championships to be hosted during the second week of The Championships from 2022, the All England Club and the LTA took the opportunity to reimagine the mass participation competition with a sole focus on UK participants.

Entries for Play Your Way to Wimbledon, Powered by Vodafone, opened on 1 March 2022, with thousands of players from clubs, parks and schools in the UK set to take part in the 14&U girls’ and boys’ singles and 18&U girls’ and boys’ doubles.

Winners will progress to county and regional finals held in June and July where they can secure their place at the national finals, to be held at the Wimbledon Aorangi courts from 7-13 August 2022.

Junior talent compete for chance to play at Wimbledon

How Vodafone IoT is helping to bring strawberries to Wimbledon