Smart Living | How to

Whether you use iPhone or Android, there are some hidden life-improving features that you need to know about.

Smartphones are our familiar friends, day-in and day-out. But there are some not-so-obvious features that even long-time smartphone veterans might be unaware of. Here’s our selection of the best.

It may not look like it, but the back of every iPhone since the iPhone 8, running iOS 14 or later, can be used as a button. Known as the ‘back tap’, it’s very easy to set up and use as our video shows:

While the back tap on the iPhone 12 Pro in our video is used to take screenshots, it isn’t limited to just that. You can use it to turn on your iPhone’s flashlight, open the Camera app, and much more. Bear in mind that some phone cases might hinder the effectiveness of the back tap, depending on their thickness or what they’re made of.

Use your iPhone’s keyboard to move the text cursor

Editing messages and emails on your phone can be laborious if your meaty or mishap-prone mitts keep making typos. Fortunately, Apple’s default iPhone keyboard can help with a clever yet non-obvious way of moving the text cursor (also known as the I-beam due to its appearance).

Typing can still be tricky, especially if you need to bash out a message one-handed – such as when holding on to a safety rail while riding public transport. Thankfully, Apple’s default keyboard can help. Just slide your thumb or finger from letter-to-letter to type out each word, letting go after each word, rather than hitting each key individually. Called QuickPath, similar swipe-to-type features are also available on other keyboards, such as those from Google and Microsoft.

One last typing-related tip. If you frequently need to type out long or unusual words and abbreviations – such as those related to your job or hobby, for example – then you can make this chore a whole lot easier using a feature called text replacements. For example, you can set up a text replacement so that tapping out ‘VONC’ will automatically insert ‘Vodafone News Centre’ into your body of text.

If your vision isn’t quite as pin sharp as it used to be, your iPhone can help by transforming into a magnifying glass for closely examining menus, leaflets and more.

This Magnifier feature has settings from colour filters to contrast settings, which can help if you have other vision issues such as colour blindness.

Why not sprinkle some of your own personality over your iPhone home screen? You can now change more than just your wallpaper by customising the app icons on any iPhone running iOS 14 or later.

Technically, you’re not changing your apps’ icons but downloading and adding entirely new ‘shortcut’ icons to your home screen which open your apps and then hiding the apps themselves away in your iPhone’s App Library.

The multi-step process is a bit long-winded, but the end result gives your iPhone a highly distinctive look and it has already proven remarkably popular. Plus, it introduces you to Apple’s Shortcuts app which makes this all possible. You can use it to do much more than just customise app icons, from giving highly specific commands to your smart home, to sharing your files with others.

Enthusiasts have created and shared their own Shortcuts for others to try.

If unlocking your Android phone is still a chore despite conveniences such as fingerprint readers, a hidden Android setting may be instantly appealing. Smart Lock keeps your handset unlocked whenever you’re in a certain place, such as your home or office. Setting it up might vary depending on which specific model of Android phone you have, but the steps should be similar to Google’s instructions.

Say you need to lend your phone to a friend or child, but also want to stop them snooping around or pranking you, then app pinning can help. With app pinning, only an app you choose – whether it’s a game, the web browser, or the phone app, to name just a few examples – can be used on your phone until you turn it off using your phone’s passcode, fingerprint or face unlock. Turning it on and off might seem convoluted, but it’s straightforward once you know how.

To enure you have the best chance of snapping a fleeting moment, you can quickly open the Camera on your phone by rapidly double-pressing the power button. This feature should be available on all smartphones running Android 11 or later. It should be on by default on phones such as the Google Pixel and Samsung Galaxy S22 ranges. To double-check on a Pixel, or if you want to turn it off, head to

The exact steps may vary depending on which model of Android handset you have, but they should be similar.

How to take better smartphone photos: The complete guide

In this beginner's guide, we give you practical tips on how to snap envy-inducing photos no matter which phone you own.
Find out more

It has happened to all of us – we’ve accidentally swiped away a crucial notification. There’s no need to kick yourself though with the Notification history feature. Once you’ve turned it on, you can see a list of all dismissed notifications as long as your phone is running Android 11 or later.

The exact steps may vary depending on which model of Android smartphone you have, but on a Google Pixel you can find the setting and the list by heading to:

Zoom with one hand

We’re all familiar with the pinch-to-zoom gesture, but it can be tricky to achieve one-handed – such as when you’re grappling with your pet dog or hanging on to a handrail while on public transport.

But there is a way you can zoom in and out using just a single thumb. In certain Google apps (such as Chrome, Google Maps and Google Photos) just double tap on content whether it’s a webpage, a map or a photo. On the second tap, continue holding onto the screen. Then, slide your finger down to zoom in. Slide your finger up to zoom out.

This conveniently handy feature is also supported in some non-Google apps, such as Firefox, as well some of Google’s apps on iOS. 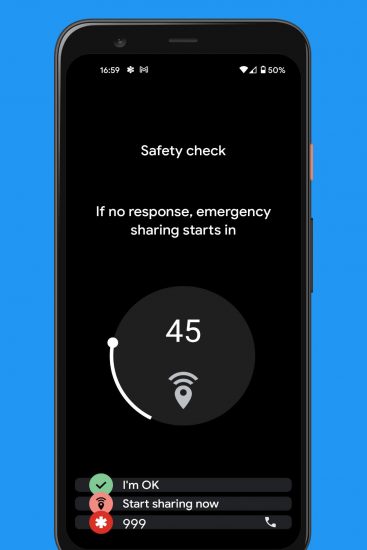 No-one should have to worry about their personal safety, whether they’re on a night out or going for a quiet drive. While your phone can’t change the behaviour of others, it can help provide some reassurance as you live your life.

When you have guests visiting your home, they may want to use your WiFi. To avoid giving them your password, and to prevent them noseying around your local network and connected devices, you can create a separate WiFi network for guests with its own dedicated password. Most modern routers have this feature, including the latest models provided to Vodafone home broadband customers.

Shift your cat and five other ways to boost your WiFi

How to take control of roaming charges

How to set up your Vodafone Pro Broadband

What to do if your Vodafone phone gets lost or stolen

How to set up your Vodafone WiFi Hub

How to record better video selfies and other filming tips

Your digital life: How to preserve it after you die